Helen Sobel (nee Martin) was born in 1910 in Philadelphia, Pennsylvania. She did not learn to play bridge until moving to New York and becoming a Broadway chorus girl. There, a fellow dancer taught her the game, which she quickly learned with the aptitude of a genius. She even parlayed her strawberry-blonde good looks into advantage at the bridge table. As Eddie Kantar claims:
Helen Sobel seldom, if ever, misguessed a queen in a slam contract when she was playing against two men. Her trick was to lift her skirt a little above her knees. It never failed that the one with the queen of spades was too nervous to look around, but the one without the queen always looked.1

Sobel was fiercely competitive. For good measure, she sometimes wore sunglasses to tournaments to deceive opponents into regarding her as a dumb blonde.2

She won her first national championship, the Women's Pairs, in 1934. In 1937, Sobel played on the United States team that participated in the World Bridge Championships, held by the International Bridge League in Budapest. She was the first female player to represent the United States in a world championship. That same year, she married Al Sobel, a tournament director for the American Contract Bridge League (ACBL). It was her second marriage (the first being to Jack White), but it would not be her last. Following a divorce in 1945, she would go on to marry Stanley Smith, an accountant.

Universally considered the best female player of all time, she won a total of 35 national championships, 3 more than her longtime partner Charles Goren, aka the "King of Bridge." Once, when a female kibitzer observing Goren asked her how it felt to play with an expert, Sobel replied, "I don't know. Why don't you ask him?" 3 The two were never romantically involved, but 20 years of playing bridge together fueled speculation which Sobel handled with her natural wit. When asked by a reporter if she and Goren would marry, she responded, "We would in a moment - if anybody would have us." 4

Unlike Goren, Sobel was not a heavy teacher or promoter of the game. However, she wrote two books, contributed a guest article for a third, and appeared on Goren's television show, "Championship Bridge with Charles Goren". In her later years, she partnered other experts including Oswald Jacoby and continued to win consistently.

"More points are lost at the bridge table through bad or pointless overcalls than any other way." 5

"I'm not aggressive. I just want my saucer of cream and I purr if you give it to me." 6 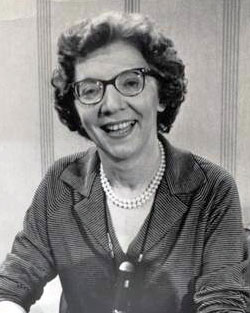 "More points are lost at the bridge table through bad or pointless overcalls than any other way."