Oswald Jacoby ("Ozzie", "Jake") was one of America's greatest card players in the 20th century. By all accounts, he was a mathematical wizard, someone who could multiply two 5-digit numbers in his head. 1

Jacoby was born on December 8, 1902 in Brooklyn, NY, and learned whist and poker as a young child. Jacoby was 15 when he lied about his age to enter the Army during World War I. Luckily he did not see any action. He spent the final two months of the war playing poker and winning over $2,000. 2

After the war, Jacoby enrolled in Columbia University as a math major, using his poker winnings as funding. His genius at games became apparent when he beat then-U.S. champion Frank Marshall in a chess match. However, he dropped out of Columbia when he earned his actuary license. At the time, he was the youngest licensed actuary in New York history. 3

By 1925, Jacoby became a regular at New York's Cavendish Club, gambling for high stakes. And by the age of 28, he quit his job to focus on gaming. 4 This was a rather remarkable endeavor considering the onset of The Great Depression in 1929. But Jacoby was brilliant at games, and they were his lifelong passion. He was an expert not only in bridge and chess, but in poker, gin rummy, canasta, checkers and backgammon. Ultimately he wrote books on nearly all of them.

In 1931, Sidney Lenz chose Jacoby to be his partner in the famous Culbertson Match. This pitted Lenz and Jacoby against Ely Culbertson and a variety of other American experts. At the time, the match was dubbed "The Bridge Battle of the Century". However, Lenz and Jacoby did not play well together, and Jacoby penned a gracious letter of withdrawal before the match finished. 5 This setback did not seriously affect his reputation as an expert, though. Jacoby still won both the Vanderbilt and Spingold (Asbury Park Trophy) in 1931. He would proceed to win multiple national titles during the 1930s.

It was in 1958 that Jacoby decided to make a serious push into bridge again. He was far behind in the ACBL masterpoint standings due to his wartime service. However, he made it a goal to overtake Charles Goren as the #1 masterpoint holder. Playing actively for four straight years, Jacoby finally did so in 1962. 7 Not coincidentally, the ACBL elected him to its Hall of Fame in 1965.

It was also in the 1960s that Jacoby dueled the chess world champion Tigran Petrosian at a game of lightning chess. The game was a draw after Petrosian spotted him a knight. Had Jacoby chosen chess rather than bridge for his primary hobby, he certainly would have been one of the world's best.

During his bridge career, Jacoby wrote a nationally syndicated bridge column, "Jacoby on Bridge", for 34 years. He also invented two bidding conventions that are still highly popular today: the Jacoby 2NT and Jacoby Transfers. His son Jim also became an expert bridge player who would win 16 national titles and 2 world championships. Ozzie was the non-playing captain for both world championships. In later years, father and son would collaborate on the bridge column and several books.

"There have always been people better than me at some game, even when I was in my prime. But I am still the best player of all games in the world today. There's no one around who can beat me." 5

"A games expert probably does more for the country than a second vice-president of a bank, whose contribution is turning down loans." 6 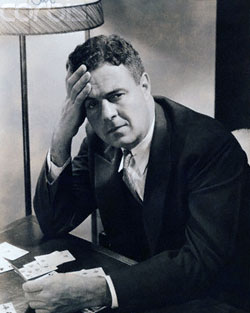 "I am still the best player of all games in the world today. There's no one around who can beat me."